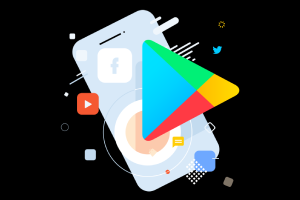 The Coronavirus and related economic crises have done nothing to stop developers from making huge profits this year. App Annie recorded total app revenue of 5 135 billion.

As usual, the balance of power was distributed in the following way: almost two-thirds of profit was brought to the developers by App Store, even despite the incredible 100 billion downloads of Google Play. Both sites end the fiscal year with an increase in profits by 25 percent. By the way, about 80 percent of Google's revenue was brought by the gamers, while Apple got only 60 percent of "cash" from the gamers.

About a third of all the profit the developers have from the users of social and entertainment applications. But this is not the limit, and analysts agree that these applications will inevitably grow in the nearest future.

The interesting point is that the main source of profit for the developers in India, far from the most developed country, is about 20 percent of users' expenses. By comparison, Americans brought to the "coffers" only 9 percent of revenue. The leader among all applications in terms of user spending is TikTok.